When the currently proposed new Transbay Terminal comes to reality, you can thank the direction of one person for its completion: Maria Ayerdi-Kaplan. Kaplan is the Executive Director of The Transbay Joint Powers Authority (TJPA), the organization responsible for the development and financing of this massive project, which was featured in this video I created last year:

The authority's work will result in the tallest building ever constructed in San Francisco, over 1,000 feet tall and a retail and mixed use complex of over 2 million square feet of space.

A member of the State Bar of California, Kaplan has served as the Mayor of San Francisco’s Transportation Policy Advisor and Project Director, the Vice-Chair on the Peninsula Corridor Joint Powers Board; Deputy Director at the Bay Area Air Quality Management District, and on the Executive Committee of the Association of Bay Area Governments.

She has been named one of the Most Influential Women in the Public Sector by the San Francisco Business Times twice, and was named the 2007 Employee of the Year by the Northern California Chapter of the Conference of Minority Transportation Officials (COMTO). 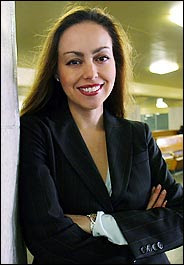 Kaplan has also been honored as Woman of the Year by the San Francisco Chapter of the Women's Transportation Seminar and named one of the Most Influential Latinos in the Bay Area by the San Francisco Hispanic Chamber of Commerce for her work on the Transbay Transit Center project.
By Zennie at July 28, 2008

Maria Ayerdi-Kaplan does NOT have the qualifications for this job. She and the TJPA are UNETHICAL in their dealing with the businesses and property owners of the 35 properties slated for destruction who will soon be thrown out to make way for the extension from the proposed new Transbay Terminal to Caltrain station. She and the TJPA will cost San Francisco billions so she can put another feather in her cap.